Home / What is Figured wood?

How do I cut wood for figure?

First, two important terms. Flatsawn and quartersawn. These are both easy to find diagrams of, but simply put flat sawn grain is when the surface of is parallel to the grains of the tree, and quartersawn is when the surface of wood is perpendicular to the rings of the tree. People will often describe a piece of wood as being quartersawn, but any piece of wood will have both quarter sand flat sawn sides. I will use the term plane or face to describe a specific surface, referring to a flat or quartersawn face, to describe the figure that would be visible.

I will start with the good stuff first. How to show off the best figure in wood through grain direction.

These are general rules to follow, there will be exception.

Curly: Also called flame, fiddleback, tiger stripe, ringed or other names These names are all used to describe the same type of curly grain that is tightly bound and often regularly spaced. These closely packed figures will almost always show up best the closer to fully quartersawn the surface is. Fully quartersawn means that the growth rings of the tree intersect the face at a 90 degree angle. The closer to this angle, the stronger the curl figure. 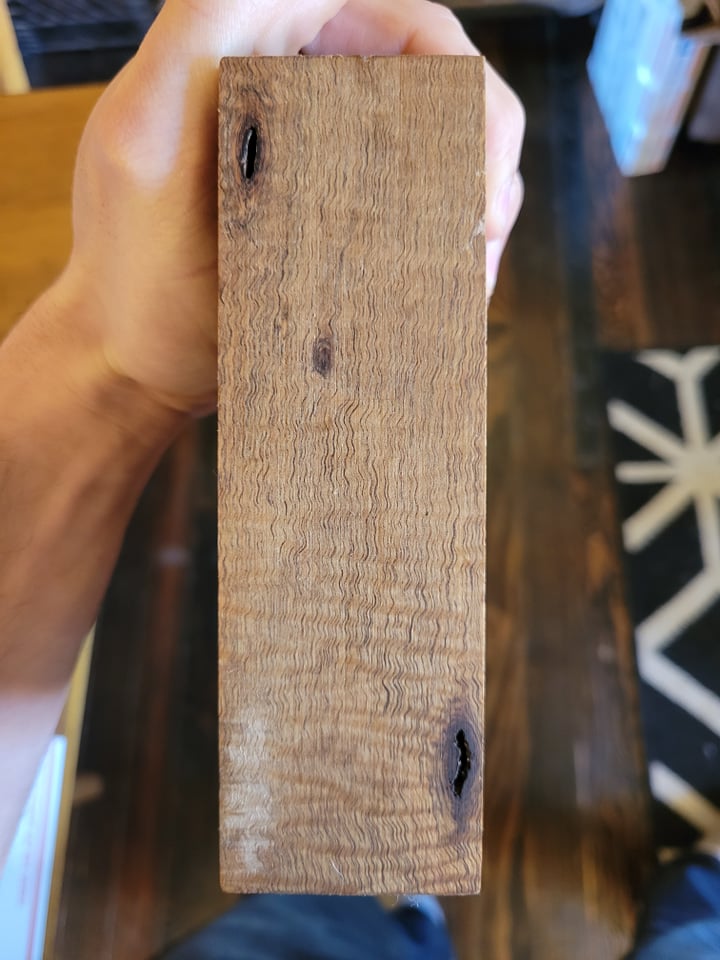 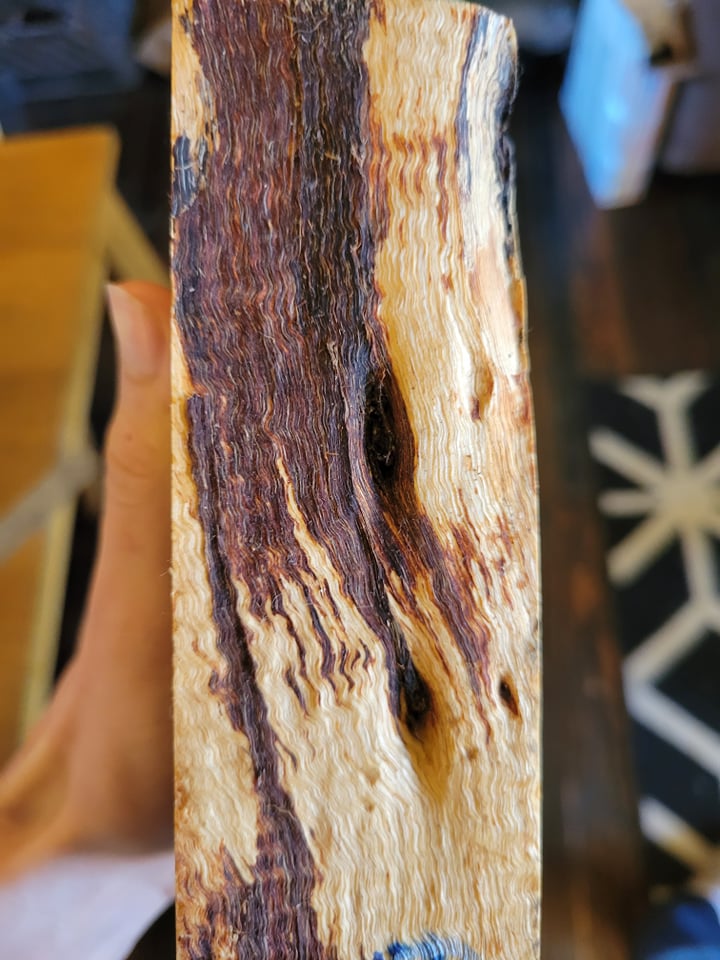 Ray Figure: Also known as medullary ray figure, this is best known in woods like lacewood, leopardwood or oak. In densely ray figured woods such lacewood, it will appear as an almost net like figure over the quartersawn surface. The figure is almost imperceptible across flat sawn surfaces 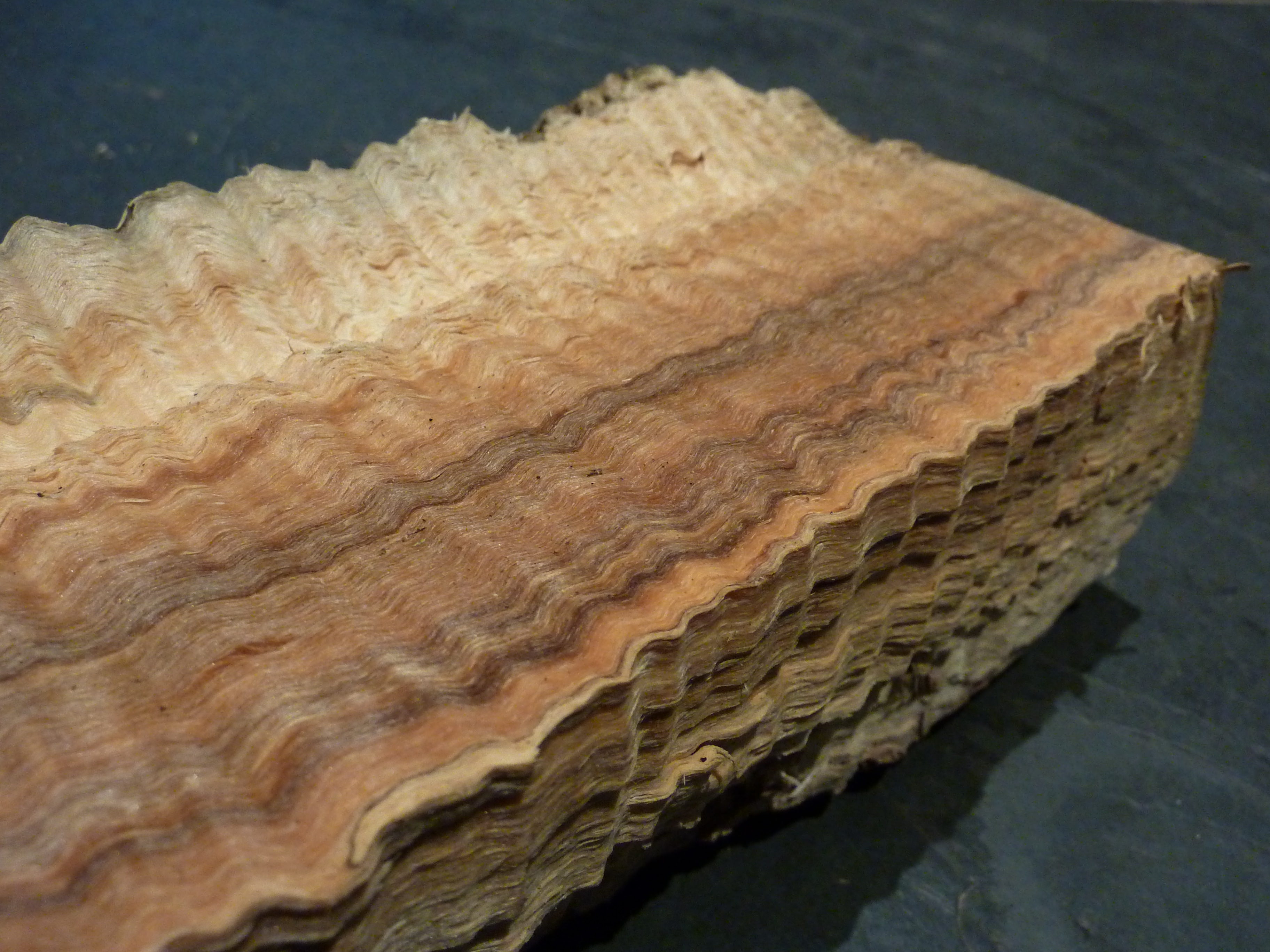 Birdseye Figure: Birdseye figure is often misunderstood and sold as being burl figure. it is not, and arises from a different but unknown mechanism. What is known is that the eyes are almost always radial in nature. Like the eyes of a burl, they show best when cut perpendular to their direction of formation, which means birdseye figure will show best on a flatsawn section. I need to add photos here to explain this.

Pommele/ Bubble/ peanut and so on: All of these figures are similar in natural to quilt, the involve movement of grain parallel to the grain of the wood an are thus best shown in flatsawn pieces.

The reason curly or quilted or pommele or any other figured wood appears so interesting has to do with a property of wood, that it is anisotropic. That simply means its properties are different depending on direction. This is obvious if you consider the different applications of face vs end grain.

But one of those different properties is their index of refraction, or how much light they absorb or reflect. For a variety of reasons, end grain is less reflective than face grain. And as discussed above, grain can undulate through wood, and if a plane of wood goes through this, in some areas the grain will be rising up out of the surface, in parts it will be flat to the surface, and parts it will be going back down into the surface. These areas where the grain is coming up or going down have part endgrain character, which means they reflect less light than the areas where the grain is flat to the surface. This results in alternating bands of more and less reflective wood, giving rise to figure.

This is why some processes will enhance the appearance of figure, they are increasing the difference between the reflection of the two grain directions. Rough surfaces are less shiny overall, this making the parallel surfaces less noticeable and decreasing the appearance of curl. By contrast, it is incredibly difficult to polish endgrain, so fine finishing and buffing will make the parallel sections more reflective, increasing the appearance of curl. Oil is also absorbed more readily by endgrain, darkening it. This is why finishes like oil or stain will often enhance curl, as the end grain character areas will absorb more and thus further increase contrast.

When this wood is cut perpendicular to the waves and planed, a surface like this is seen. 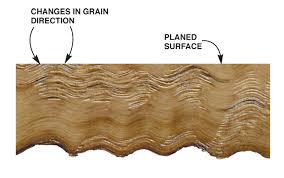 As you can see, the angle of the grain meeting the surface varies in a repeating pattern. And because the end grain reflects light differently than face grain, a pattern emerges. Across the surface of the block, light shines unevenly and thus gives yield to a curly figure.


Burls are special to knife makers. We love them more than any other craftsmen. And their beauty is palpable. But what is a burl? How do you maximize its beauty?


Well, there are two main types of burl. Grain burls and eye burls. Grain burls will often look like a brain, randomly formed grain with a smooth to slightly knobbly surface. These burls will lack the dramatic eyes that are loved. These burls tend to form around dead wood or at an injury as the tree attempts to grow over a wound.


The much more valued burls are eye burl. Their surface will often look covered in pins 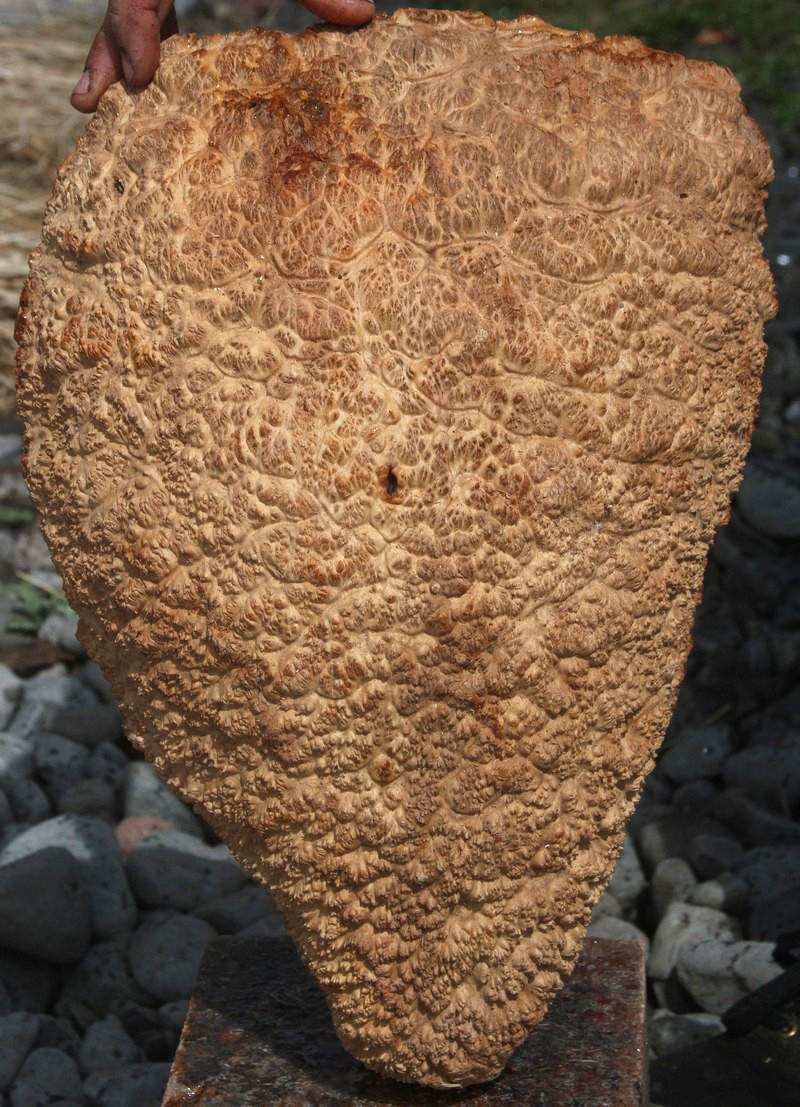 This burl cap shows the tell tale pins of an eye burl. These burls are caused mainly by a bacterial infection. This bacteria creates a hormone that in trees induces budding. This hormone buildup causes the tree to form many small buds that due back and become encased in more buds. They tend to form from a single point. And emanate outward.


You can think of them as half of a sphere. The center of the flat side of sphere is the site of the infection, with many tubes radiating out from this point. If you were to cut a surface parallel to the flat of semi sphere, you would be rewarded with a surface full of eyes, as you would intersect the tubes of the burl. If you were to cut perpendicular to the flat of the burl, you would see a figure reminist of curly grain, as you slice the tubes of the buds in half along their width. 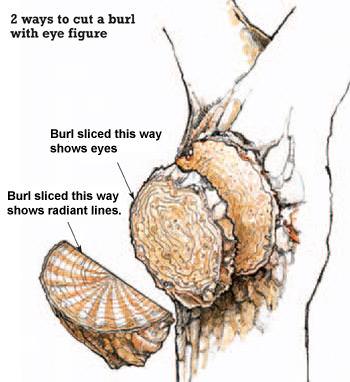 This image should explain it.